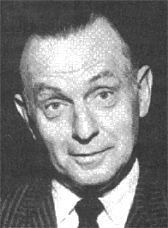 Ross was a member of the "Secret Six" from 1940 and the New York "Inner Circle". Faucett also performed magic at fairs and carnivals.

(November 19, 1900 - May 18, 1987) Faucett Ross became a professional magician in the 1930s. He was a native and lifelong resident of St. Joseph, Missouri and a veteran of the US. Army in WWII. His grandfather, R.H. Faucett, founded the town of Faucett, Mo. Faucett entertained many celebrities and Presidents Wilson, Roosevelt and Truman. He considered T. Nelson Downs his mentor.


In 1933 Dai Vernon was at the world trade fair in Chicago, and 1934 he worked with Faucett Ross. Faucett became a close friend of Dai Vernon. He helped Dai prepare his Ten Card Problems (1932) Also known as $20 Manuscript or DeeVee Manuscript and stage his Harlequin Act. Ross is also responsible for organizing and co-authoring almost all the Dai Vernon's material in print at the time.

Faucett said that there are two standard tricks he did best; the Egg Bag ( taught to him by vaudeville magician Hyde Johnston) and the Thirty Card Trick.

Faucett had many friends in magic and it was estimated that during the course of his life he wrote over 20,000 letters.

He was awarded an honorary lifetime membership with the Academy of Magical Arts.

Faucett Ross Was one of John Carney's mentors. In John Carney's book "The Book Of Secrets" the book "Magic with Faucett Ross" is mentioned in his Reading Required section; "Magic with Faucett Ross, one of my favorite books, contains many practical, audience-tested routines for the satge from my early mentor and friend. Faucett understood the meaning of a good effect and was skilled at transforming standard trick, through routining and fresh combinations, created great magic for entertainment."

In 1975, The Wichita Conclave was formed, the conventions featured many of the greatest magicians of the 20th Century which included: Joe Berg, Jay Marshall, Faucett Ross, Dai Vernon, Fred Kaps, Flip, Kuda Bux, a young Lance Burton, and David Copperfield and of course many others. Apparently Vernon and Ross lived next door to one another in Wichita for quite some time.

From the book "Phantoms of the Card Table"  By David Britland, Gazzo; "Cardini reported that he had met Faucett Ross In Kansas City. Ross was both a friend of Vernon and Downs though not as expert in sleight of hand or as interested in gambling methods as they were."

During the early 80's Jay Vincent of Kansas City, and others, sponsored a Close-up Weekend at St. Joseph, Missouri for Faucett Ross. This was in April of '82 and featured Dai Vernon, Charlie Miller, John Carney and a host of friends. It was such a blast that a very young David Sandy jumped on the wagon and duplicated a second celebration for Ross in '83 with a new title: Faucett Ross Honorary Magi-Fest. He brought in some of the same personalities plus Petrick & Mia, Shimada, Slydini, Mike Caveney, Paul Harris, Bob Little and scads of others. Stuffed with activities and terrifically friendly people, but not too crowded, made this, probably, the most enjoyable convention this writer ever attended.

..... Thanks Rick for allowing me to add the following information from your club history!

1925
Tracing the ancestral record of a family name or the historical events of a magic club is not an easy task. Records of activities preceding the origin of the Wizards of Wichita Ring 47 are somewhat sketchy but much has now been recorded due to the assistance of Faucett Ross and Loring Campbell, each an early-day resident of Wichita and each a contributor in his own right to the art of legerdemain.

Campbell, now living in California, was raised in Wichita. He toured the country for some twenty-five Lyceum Bureaus and many Chautauqua Bureaus starting in 1925. This writer met Loring at a school show in a small Kansas town around 1930 when he and his lovely wife Kathryne presented a Potpourri of Prestigitatorial Paradoxes to a screaming mass of intermediate students that enjoyed every delightful minute of it. Magic... Ventriloquism ... Chalk Talk... truly one of the best magic programs ever seen in schools.

1929
Faucett Ross came to Wichita in 1929 as a reporter for The Wichita Beacon. Another employee showed him a set of English Multiplying Billiard Balls made of ivory. It was through this man Faucett met Campbell, who in turn introduced him to Carter Harrisonjust then commencing his interest in magic. Among the few enthusiasts during that period was a former "fixer" for Anna Eve Fay. This man would go into towns in advance and arrange "tests" to be presented later during her performance.

1930
Don White, then very young but married. worked many dates in and around Wichita. The late Doc Nixonof the "Shanghai Mysteries"lived at the Harrison Apartments for several months. The welcome mat was always out at Harrison's for magicians "between dates" though often spells between dates were of indefinite length. In 1932 a couple of promoters formed a revue type show with 30 people, went on the road and folded in a short six weeks. Most of the 30, including Faucett Ross, was left holding the bag for much of their back-pay.

1931
Around 1931-32 Dai Vernon spent a good deal of time here cutting silhouettes at the Innes Department Store. It was during this time Dai and Faucett, while burning night oil at Harrison's Apartments, brought forth many of the Vernon memorable effectsincluding the well known $20 Manuscript. This resulted in a close personal relationship between these three men. Carter, I was told by a prominent Wichita PhysicianA. F. Wittmannused to high-dive from the top of the old Murdock Street boathouse in the park for Sunday afternoon crowds. He later became a State Representative and was often referred to as "Senator" by his close associates.

1932
I met Loring Campbell when he appeared at my school in Hutchinson, Kansas. Later that evening I visited Loring and Kathryne at their hotel and bought one of his Spirit Mirror card effects. I made many of these later with variations for my own use. No doubt, any performers I met in my home town surely worked in Wichita. The Campbells came through again in December 1935. Willis Myers was working about the area from Wichita also, although I don't remember the exact event but he was billed as the Great Hamlet.

1933
Sometime during my high school days Eugene Laurant appeared at the auditorium. I don't recall many of his effects but one doesn't forget his personality.
Other unrecorded visits of entertainers were Karston with an unforgettable stage show; when I approached him backstage with my `card' and asked him for his he informed me he didn't have any cards. But his show was colorful and impressive. "Francisco" (A. J. Bull) brought to this area the first spook show I had the pleasure to see. Later John Leonard, as Hadji Baba, with the MardiGras Nights unit presented the most unusual spook effects ever witnessed on a lighted (but dim) stage.
Herman Woulfe of Chicago played many schools in Wichita in 1933 but Faucett Ross and Loring Campbell generally had the field pretty much to themselves. Due to the scarcity of magicians there was no thought given to forming a club then.

TO READ A GREAT STORY ABOUT DAI VERNON, FAUCETT ROSS AND THE 'MIDDLE DEAL' CLICK HERE!
All Contents Copyright 2008-2009